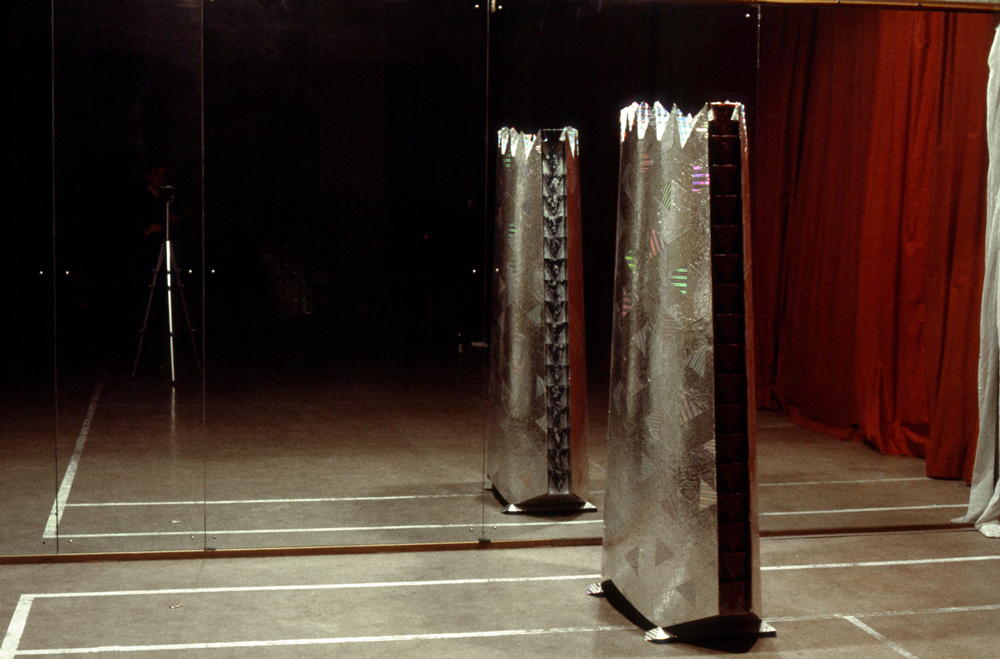 above : Tao Tie 3. Photographed in the dance space below my studio on the Westminster Bridge Road, London. 1983

These are a selection of artworks from the 1980s that cover my time at the studio in Waterloo and, from 1984 at South Street, Greenwich.

After leaving the RCA I continued my explorations of the nature of objects through the interpretation of active surface layers. At the beginning of the 1980's there were several technological developments - the beginnings of the personal computer, the launch of the space shuttle and the adoption by artists of hologram techniques.

During my time at Waterloo (1981-84) I developed a method of cladding plywood structures with tiles, drawn from Islamic patterns, that were made from aluminium kitchen foil and glued onto card. These were constructed like the ancient Chinese pottery motif, the Tao-Tie or opposing dragon faces. In 'Tao-Tie 1' the foil was typed on a mechanical manual typewriter with digital sequences of 1's and 0's. There are about 4800 diamond shaped tiles on this piece which took about a year to make. In later pieces the aluminium was run through a printing press onto an acid etched plate containing swirls and graphics.

Concurrently I produced a series of paintings using gold powder and shellac with encrusted surfaces. These explored the crude shapes of computer game graphics and the visible expression of wealth, reflected in the Thames, of a de-regulated City.

From 1984 the work moved onto being wall-based and these became more complex in terms of their outlines. I was interested in viral patterns and morphologies and also the images of frozen worlds that were being sent back by remote spacecraft, especially the Voyagers. These works were painted with raw pigments and shellac and went from being single units to composites.